Focus. Focus. I need to focus, to find an image, a metaphor to guide when life’s rapids churn around blind curves and threaten to upend me. 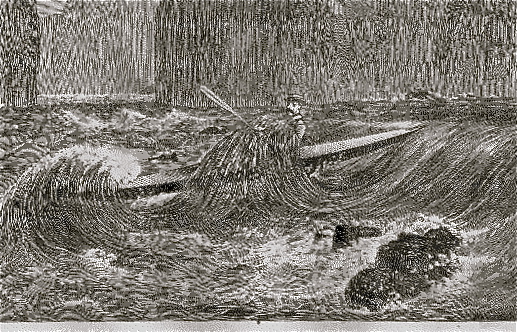 Rapids of the Reuss, Illustration from 1,000 Miles in the Rob Roy Canoe

What’s the point, I wonder, of crafting a vision for a life, without a symbol? I try on images like new dresses.  Words from Henry David Thoreau’s Walden echo.

…beware of all enterprises that require new clothes, and not rather a new wearer of clothes. If there is not a new man, how can the new clothes be made to fit?

The first time I heard of a life image was when my daughter’s friend, poised between college graduation and a new career, said “I want to be the Swiss Army Knife, you know, that guy who’s helpful in any situation.” 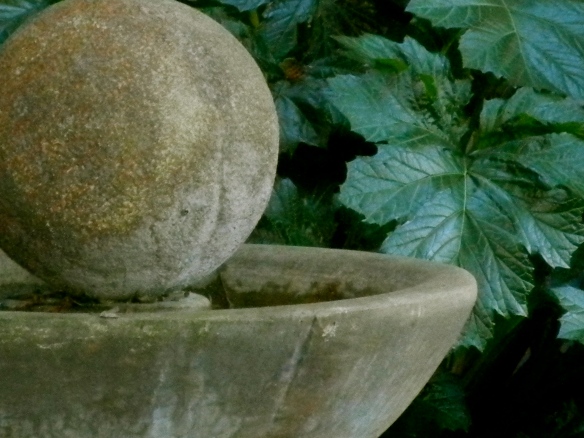 No, I’m not a rock.  A stone is too immobile, improbable. Too cold.

Quick jot.
Things I love:
You. Of course. And…
Ocean.  Freedom.  Literature.

Woman’s search for image simmers on the back burner as I unpack more boxes to fill the new bookcases J built for me. I find Dove by Robin Lee Graham, a yellowed, dog-eared souvenir of my teenage reading taste.  “The true story of a 16-year-old boy who sailed his 24-foot-sloop around the world.”

I unpack a stack of freshly printed copies of dirtcakes, the literary journal I founded. I remember when I first hatched the idea of birthing a journal and asked around for  inspiration. A friend told me his favorite was Kayak Magazine.  George Hitchcock, Kayak’s founder, used to say,

A kayak is not a galleon, ark, coracle or speedboat. It is a small watertight vessel operated by a single oarsman. It is submersible, has sharply pointed ends…It has never yet been successfully employed as a means of mass transport.

“…operated by a single oarsman…” J and I kayak together and I’m a terrible backseat paddler.  Yet a daytrip to Venice Beach finds me walking along the canals, thinking of vessels, maybe boats with only one seat, not “a means of mass transport.”

Did you know almost 100 years before George Hitchcock started Kayak Magazine, another man took off alone to explore Europe in a canoe, selecting that vessel because,

…in the wildest parts of the best rivers…these very things which bother the “pair oar,” become cheery excitements to the voyager in a canoe. For now, as he sits in his little bark, he looks forward, and not backward. He sees all his course, and the scenery besides. With one sweep of his paddle he can turn aside when only a foot from destruction.

He can steer within an inch in a narrow place, and …can shove with his paddle when aground, and can jump out in good time to prevent a bad smash. He can wade and haul his craft over shallows, or drag it on dry ground, through fields and hedges, over dykes, barriers, and walls; can carry it by hand up ladders and stairs, and can transport his canoe over high mountains and broad plains in a cart drawn by a man, a horse, or a cow. (From A Thousand Miles in the Rob Roy Canoe on Rivers and Lakes of Europe by J. MacGregor.)

Kayak. Canoe. Canoe. Kayak.  Some websites say the words are interchangeable, others cite leg and seat position as defining characteristics between the two.  Kayak is a palindrome, a word that reads the same from front to back. It moves only through human effort, glides silently, is open to the sun and moon, the breeze and stars. So too, the canoe. 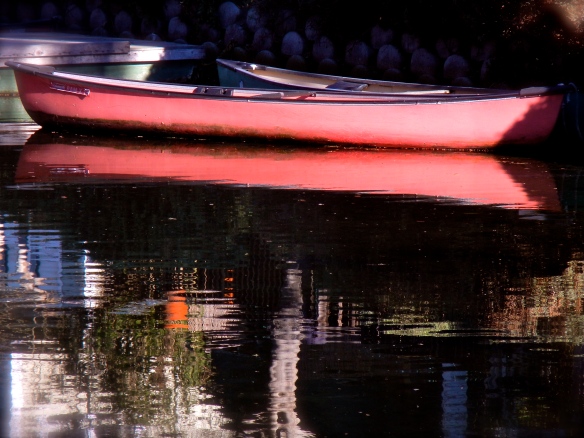 Maybe for once the word matters less than the image. Kayak. Canoe. A noun. A verb. A vessel wherein the wildest parts of the river of life can, “become cheery excitements;” a vessel wherein the paddler “looks forward, not backward…and can jump out in time to prevent a bad smash;” a symbol to take along into the big wide open year.

With wobble and strength,
~Catherine

Précis:
An image can remind you to stay on track with the life vision you set for yourself.

Practice:
Explore things you love – books, places, people – for ideas to create your own personal  image.  Settle on this image/metaphor for the year.  Post it in a spot you see every day.

Play:
Read about others’ adventures where a single object becomes metaphor.  Herman Melville’s Moby Dick immediately comes to mind. What, that doesn’t sound like play to you? OK, fine; go out and kayak. Then send us a focused photo.