What do you do if you want to go somewhere and your family and friends don’t or can’t get away when you can? Deciding to explore the world on your own can be a daunting prospect. Thoughts of the drawbacks may cycle through your mind: having no one to rely on should problems arise, planning the trip all on your own, being a target because you are solo, table for one most of the time, or the possibility of being lonely.  The perks of doing what you want, when you want, wherever you want look attractive but will it be right for you? It takes a leap of faith to take on the challenge. As with most things — you don’t know what you don’t know. With a “you won’t know until you try it” attitude, I took that leap of faith to France a couple of years ago and in the process learned a lot. Among many memorable experiences, a long afternoon and evening taking in the changing light of Mont Saint-Michel stands out. 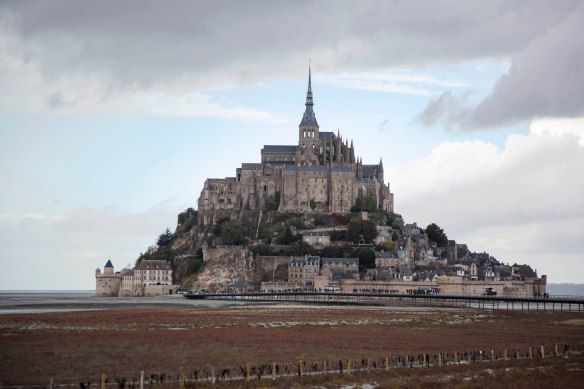 At first sight, the Mont is an impressive and awe-inducing structure. Its size dwarfing the people and vehicles on the bridge. This area is known for extreme tidal fluctuations and upon my arrival the tide was out and the light muted from the gray sky. 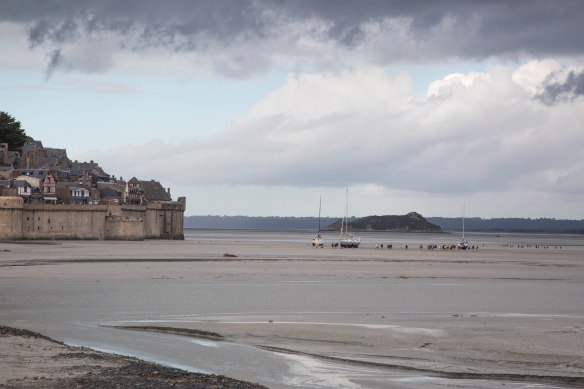 Boats become stranded and people walk in the silty sand, with caution, during low tides. 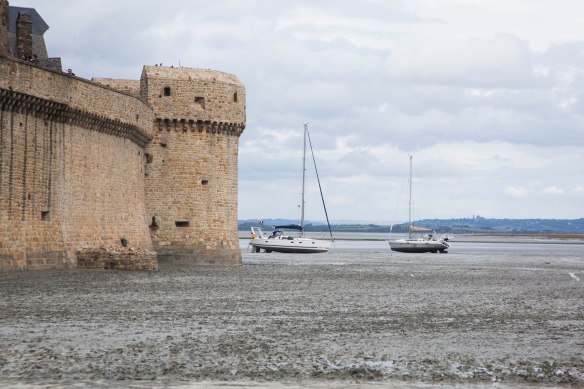 I walked up to the Mont on the bridge, explored the town and toured the Abbey taking my time admiring and capturing the almost 360-degree view from the top. 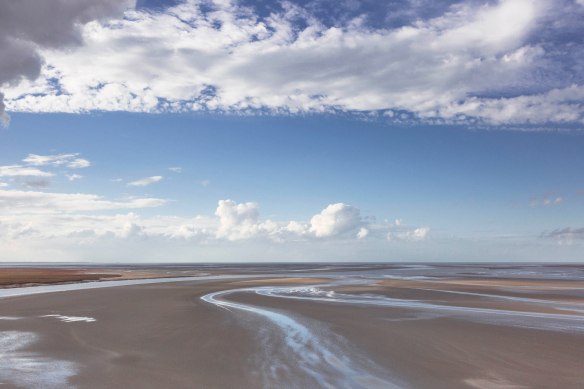 As the afternoon became evening, the sky, filled with billowy clouds, was ever-changing. The golden hour had begun. Different times of day bring a change in light to subjects. At sunrise and sunset the sun is near the horizon which creates a golden hue and casts long shadows. The hour or so leading up to and right after sunrise and sunset the light changes hue quickly: from deep blue to pink to gold in the morning and the reverse in the evening. 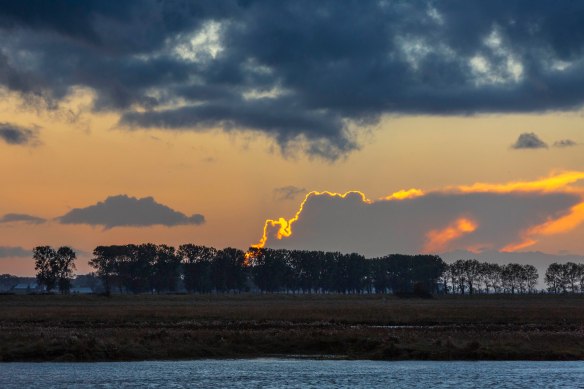 The late afternoon sun added a beautiful golden tone to the walls. 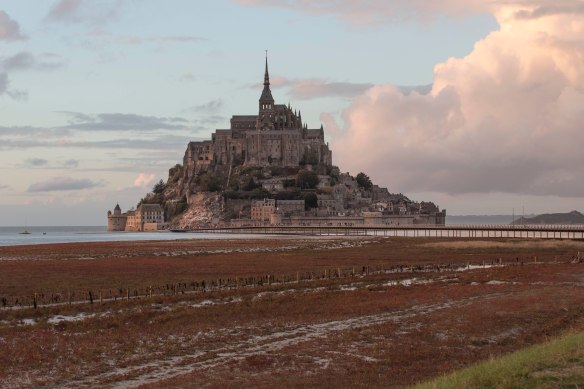 The surrounding countryside isn’t immune to the sun’s rays. 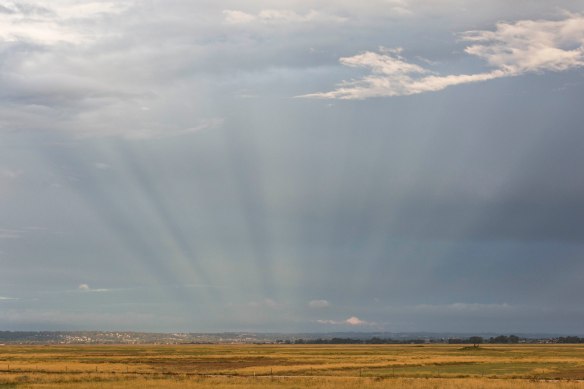 Lost in the color changing cloud shifting metamorphosis in the sky, I suddenly became aware of the sound of rushing water: the tide, on its return, surging towards the land. Within about a half an hour, the boats are once again afloat as the gold turns to pink. 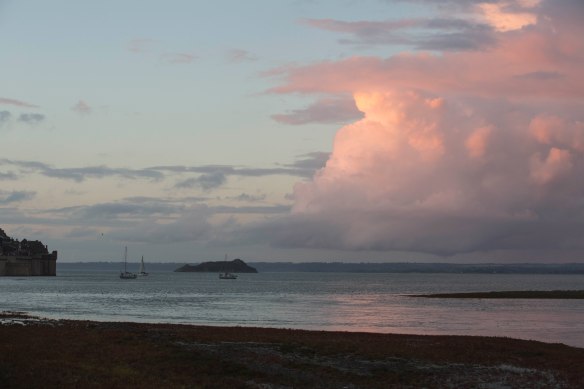 The speed of the incoming tide creates waves. 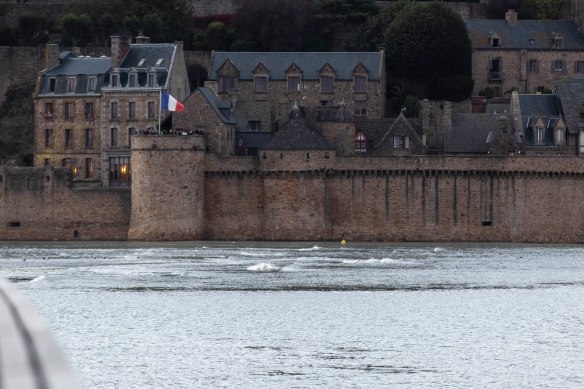 Captivated by this tidal phenomenon, I hadn’t noticed the darkening sky until a drop of water hit my cheek pulling my attention back to the sky. First one, then another and another and suddenly I am in the middle of a rainstorm. Luckily, I came prepared and pulled out my umbrella allowing more time enjoying the demonstration of mother nature’s extremes. During the rain, the lights on the Mont were lit, illuminating the walls. 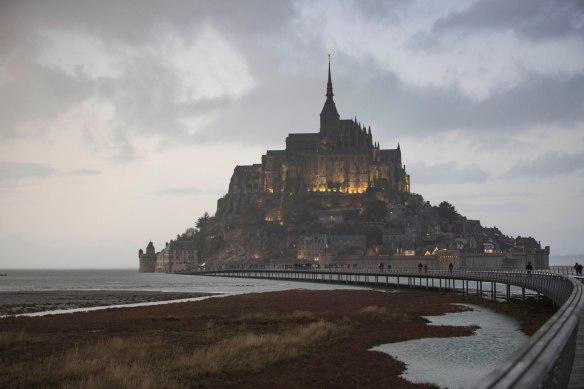 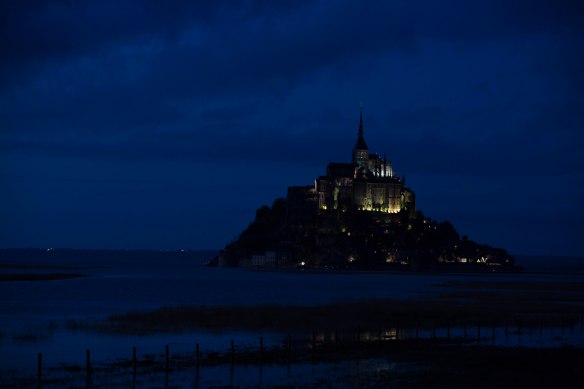 I left to grab some dinner and afterwards went back to get the full nighttime experience. 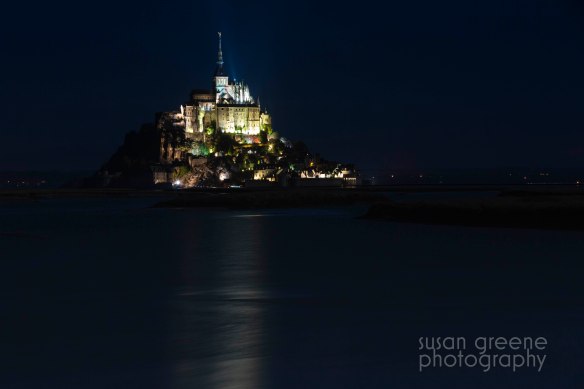 The tide was at its high point by this time and the lights of the Mont reflecting on the water.  What a glorious sight! Contemplating my afternoon and night, I felt blessed and grateful for having taken that five-thousand-mile leap of faith putting me on the distant shore that day. Being alone allowed me the unscheduled time to linger and follow my interest. If I had waited to go or been with somebody who wasn’t willing to stay to let the moments unfold watching the light change, I would have missed out on the events that October afternoon. I never would have come to the conclusion that the Mont-Saint-Michel is a beautiful subject in all lighting.