Dear One,
You of all people will understand this darting and dipping and how it happened that I really couldn’t write today.

Morning broke with new weather, a salty breeze, skipping and blue. It would have been rude, insolent really, to refuse Nature’s gift by staying indoors.  I packed a small bag of cherries and found a spot at my favorite cove. Into the sand I buried my feet where it was cool, still damp; I upturned my palms, lifted eyes to the sky.

At that exact instant, one, two, three, seven California brown pelicans arrived silently gliding on invisible currents of air, perfect in frame and formation. Ancient Egyptians believed pelicans brought protection against snakes. How could I not dip my own head briefly in gratitude?

Wingspans longer than I am tall, each outstretched bird was an aerial dancer in the Pacific ballet, utterly at ease with ungainly beauty. Prehistoric.  For more than 30 million years, back to the Oligocene epoch, since before humans walked upright, the pelican’s beak has remained unchanged.  This evolutionary marvel, this “first thought, best thought,” as poet Alan Ginsberg might call it, is a rather recent revelation, unearthed by a rare fossil find in France in 2009. “Few other flying animals appear to have survived unchanged for so long.” wrote the BBC’s Matt Walker in his account of that news.

While children squeal and grownups read updates on smart phones, or jog, or surf, there in the sky for all who will look is a symphony to original design perfection.  I scribbled in my notebook: There you are, ancient relic, resplendent and brown — color of earth, myth of heaven.

Pelicans, depicted on tombs in ancient Egypt, “have the power of prophesying a safe passage for a dead person in the Underworld…The open beak …is also associated with the deceased to leave the burial chamber and go out into the rays of the sun,” reports George Hart, former curator in the British Museum’s Education Department in The Routledge Dictionary of Egyptian Gods and Goddesses.

Was a soul in transport this moment? 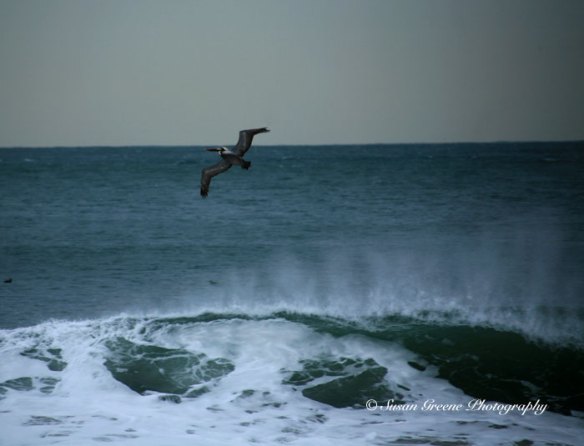 Death seemed dim as I watched the birds soar the surf line, then climb.  They scattered to hover then dove. Headlong, with no hesitation from great heights, the way I wish I went through life, they hurtled into water. No splash. A perfect 10, Olympic judges would say. Imagine the brown pelican, as extraordinary a thing as that and almost nevermore, just three years off the Endangered Species list.

The pelican’s survival is linked to the very history of our own country.

President Theodore Roosevelt created the first national wildlife refuge, Florida’s Pelican Island, in 1903 to protect the brown pelican from plume hunters.  Teddy and I share a love for these birds, a link I discover in his 1916 collection of essays, A Book-lovers Holidays in the Open.

to lose the chance to see…a file of pelicans winging their way homeward across the crimson after-glow of the sunset…why, the loss is like the loss of a gallery of the masterpieces of the artists…”

Suddenly, the birds I watched stopped diving. In response to an inaudible signal – A call drowned out by the waves? A wing tipped toward the sun? A movement of prey to the north? – seven pelicans fell into line once more. They lifted, barely skimming the water, “winging their way homeward.”

I watched and wondered: Am I this elegant in my food hunt?

Out to the depths the pelicans flew; rising like wishes until I could only remember where they’d been.

The pelicans. The day.
I promise I’ll stay in tomorrow and try to write something worthwhile.