When I packed to move this weekend, I found a 1995 newspaper clipping of a public letter I’d written to Fabio, the Italian model, after he stood me up for a workout date to discuss a fitness book he’d written. The headline reads, “Black leotard awaits its fabulous destiny with Fabio.” 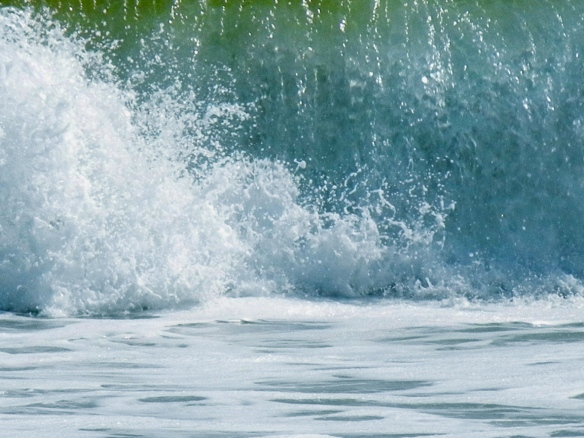 “There’s a hurricane swell today,” the lifeguard told me on Friday. “You shouldn’t go in without fins.”

I don’t own fins.   Undertow yanked my ankles like a two-fisted giant; waves crashed overhead. Hurricane Fabio’s effects impressed me enough that for the first time ever I postponed an annual tradition begun when I was 15.  I always body surf on my birthday to celebrate life’s wild beauty, and in some weird way, to prove that I’m not yet old. I wondered what it’d mean to give myself a hurricane delay.

When the universe nudges me twice in one weekend, I wonder if it’s trying to tell me something.  I reread snippets of the letter.

Oh sure. I’m the one who stood you up on our first date.  That afternoon we were supposed to work out together at Gold’s Gym was a nightmare. There I was, stuck in traffic, miles from you.  The clock crept fast; the Hollywood Freeway did not.  You had to leave before I got there. Remember what you said when we spoke by cell phone?

Don’t worry, Catherine. When I get back from New York we will work out.

When my friends and husband and editor found out I’d missed our date they wailed and gnashed their teeth.  Who’s late for a date with Fabio? I felt terrible, but I readied myself for your promise. We will work out.

I bought a new leotard. Black.

I reread your book, Fabio Fitness.

I had so many questions.

Do you really use miniature utensils so you don’t eat too much?  Is it better to work out with a buddy as you suggest on page 188?

I did a few sit-ups. Eight.
I bought new shoes. Black.

I mourned that we’d missed our first date, but was secretly relieved. I thought your workout might be too hard and I’d huff and pant and act the fitness level of someone who spends her time reading romance novels.  I was willing to sacrifice my body because I had more important things on my mind. Fabio, I wanted to give you the chance to prove that looks aren’t everything and that you really cared about the health and well-being of all the women who swoon at the sight of you.

I bought a new pair of tights. Black.

You returned from New York and invited me to your Hollywood Hills home instead of Gold’s Gym.  Your Los Angeles publicist said it was because you’d just installed a new sound and video system.  You wanted to show it off.

Your publicist invited me to your house for lunch. I said I’d be delighted to come, I’d even help cook recipes from your new book. After we worked out.

Your publicist said you’d changed your mind; you didn’t want to share your workout. Your workout is a religious experience for you.

I didn’t want to come to your house to talk. I wanted Fabio in action, helping women becoming more healthy and fit, like the press kit said you were devoted to doing.

I threw back my head and laughed.  I did used to buy new clothes when I was nervous and running late is something I’ve spent years trying to purge from my bad habit list. But seriously, I’d given up a date with Fabio to prove a point?

I know one thing for sure. I’ll be headed back to Crystal Cove in a few weeks to make good on that birthday body surfing tradition. If you happen to see Fabio, tell him he can join me. To work out.

Wishing you all swell things,
~Catherine

p.s. This letter to Fabio first appeared in a slightly longer form in The Orange County Register, Oct. 3, 1995.